There are many tales about the first President of the United of America. Some are true (he never fathered any children), others are downright propaganda (he didn’t cross the Delaware at the head of his troops by row boat and with a massive flag flying). Others are just apocryphal (he never said “I cannot tell a lie” and nor did he cut down a cherry tree). One thing about the man that has persisted is whether or not he had a pair of false teeth made out of wood. Tooth care back in the 18th Century was not at its best and cavities were an issue. However as sugar was only limited to the rich it was more likely to come from the small rocks and grit that was in the bread they made. 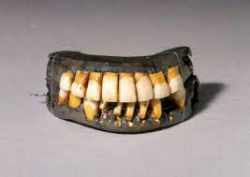 Given the chance you would have expected a noble chap like Washington to have gone straight to All on 4 dental implants and got himself some nice new gnashers or got some care for his existing ones. If he’d had the internet you can be sure he would have gone to https://www.arnicadentalcare.co.uk/all-on-4-dental-implants-cost/ immediately.

The truth is actually really very gross. Washington did indeed have a set of false teeth but that’s what they actually were, teeth. They were set in a wooden frame which had hinges on the side to open and close like a real jaw. The teeth in the wooden frame were teeth that were “donated” possibly by Slaves from Africa. This wasn’t a problem for George, he’d inherited slaves when he was 11 so it seemed quite normal for him and not at all inhumane. God bless America indeed.