The call that one person really did not want to hear

We are all used to getting a call on the mobile. For the most part they are friends and family calling to see how we are and what we are up to. Then there are the random calls about issues with your computer or bogus HMRC operatives saying that you haven’t paid your taxes. We don’t want these calls but they are nothing compared to the call that Dr Joel S Engel got from Mr Martin Cooper on the third of April nineteen seventy three. Mr Cooper wasn’t ringing to ask Dr Engel if he’d been in a road traffic accident that wasn’t his fault nor was he enquiring if the good Doctor had considered the benefits of Solar panels, via a government grant. It was a friendly call. The thing was Mr Cooper was making his from a mobile phone and Dr Engels was on a landline. This was not a situation the Dr Engels wanted to be in. 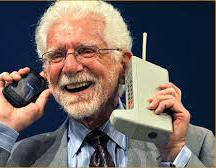 This was the first mobile phone call ever made. Mr Martin Cooper was a research executive at Motorola and Dr Engels worked at Bell Labs and was his rival. There was some cold comfort for Dr Engels that the phone Mr Cooper used was roughly the size and weight of a brick. Another thing that Dr Engel could console himself with was that Mr Cooper could only chatty boast for 30 minutes before the battery ran out. It then took a further 10 hours to charge the thing back up again so that you could use it.